Prevention of melancholy through Yoga Niyamas

The practice of yama enables us to eradicate all the sorrow from our life and experience beatitude and divine bliss. Melancholy is the next stage of sorrow which can be eliminated through niyam. Niyamas cleanses our mind and body and enhances the worth of an individual. All kinds of emotional disorders can be exterminated through niyamas. It means that an individual who observes niyamas will attain the ability to suppress all kinds of emotional disorders. 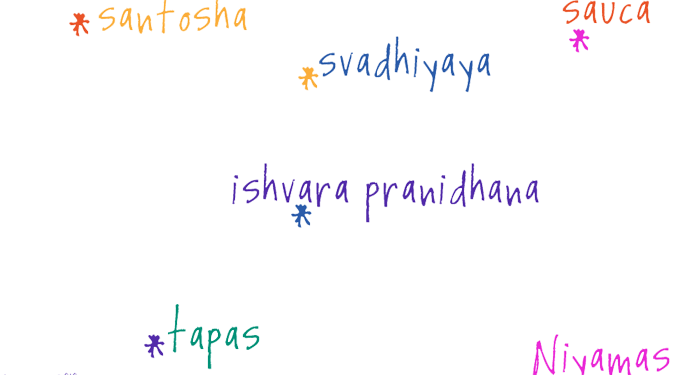 Shauch (cleanliness): Emotional distress cannot be eradicated without shauch (cleanliness). It is of two types (1) external and (2) internal. Water and soaps can wash out the exterior impurities. But in order to cleanse the internal impurities we need to adopt the practice of kriyas. Nethi, dhauti, vasti, tartack, kapalabhati and nauli are the various kinds of kriyas which can be implemented to keep our body clean externally and internally. Along with keeping our body healthy and serene, kriyas enable us to control, restrain mind and impart discipline to it. Thus as a result we can get rid of all kinds of emotional distress.

Santosh (contentment): Santosh is the second tool to eradicate melancholy. Handling your duties with total consciousness and to remain aloof of expectation of power and desire is called contentment. Being satisfied with the end result of your deeds, whatever it could be or however it could be irrespective of circumstances prevailing is called contentment. Thus living a satisfied life with what you possess rather than concentrating on amassing possessions more than required to lead a comfortable life is called santosh. Contentment is true wealth of a yoga seeker. He proves to be wealthy, prosperous, peaceful, happy and richer than anyone else on the earth.

Tapa (austerity): The readiness to accept and face all the hardships in performing his swadharma (duties) is called tapa. Here swadharma doesn’t mean the study of geeta, bible or quran. Discharging your duties with total consciousness is your true swadharma. The readiness to face any circumstance in order to adhere to the instructions of your master or the orders of your elders is called tapa. One who discharges his duties perfectly irrespective of the circumstances alone can live peacefully in this world. One who tries to escape from his responsibilities or one who pays no attention to the elder’s opinions will fall prey to daurmanasya (melancholy). But one who observes tapa with all his faith will experience mental peace and bliss. Thus tapa is the ability to face adversity and hardships in order to perform the righteousness.

Performing vrata (vow), upvas (fasting), sadhana (meditation) etc fall under the category of tapa. All these acts lead to the purification of conscience. Thus tapa eventually leads to self-improvement. It results in the improvement of eligibility, capacity, power, knowledge, truthfulness and personality. One who practices tapa is considered to be heroic, warrior and legendary.

Swadhyay (study of self): Swadhyay is a blend of two separate words swa and adhyay wherein swa means self and adhyay means study. Thus swadhyaya means study of self. Trying to examine one’s own self and making an attempt to know thy self is called swadhyay. Such introspection and concentration of mind on energy centers of your body also are considered to be part of swadhyay. Along with these the seeker tends to study religious scriptures and literature in the search for reality. Study and contemplation of such literature and trying to implement it in real life is also called swadhyay. Thus swadhyay also proves to be an effective tool to handle melancholy in an individual’s life.

Eshwar Pranidhan (surrender to god): The perfect and ultimate solution for daurmanasya (melancholy) is to surrender one’s own self to god. To hold god in your heart, sacrifice your entire ego to be totally devoted to god, completely surrendering to him and acting as per his gestures is known as eshwar pranidhan. The seeker ceases his intervention with the happenings to him or around him. He ceases to be an actor and continues to be an audience of his own life.

In reality nothing can happen against the will of god. Thus what is destined to happen will happen for sure and that which is not the wish of god can never happen. But man generally tends to be in an illusion of being the creator of his own destiny which eventually causes him to be happy or sad. In fact man tends to take up the pride of being the sole reason for his success but hardly ever admits his own mistakes to be the reason for the times of his failures. Most often luck and fate blamed to be reason for his failures. But in reality, he is neither responsible for his success nor for his failure. It is well quoted in Ramayana –

Hani (loss), labh (profit), jeevan (life), maran (death), yash (fame), apayash (defamation), jay (success), apajay (failure) etc are all in the hands of god. Revered Swamy Subodhanand ji Maharaj always adviced to do your best and leave the rest to god. It means we should discharge our duties with utmost sincerity and stay without being bothered about the result. This is called eshwar paridhan in true terms.