Shirshasana is popular yoga poses in one stand on the head. The word shrisha came from Sanskrit. When you are practicing yoga poses, you can try Shirshasana pose which sit on the seat with feet behind the knee in front and head lower down. In Shirshasana poses, the fingers are interlocke 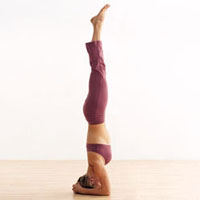 d each other and keep your elbow on the seat comfortable in distant parts. Your head is placed on the seat with supported from behind with your hands. When you are practicing Shirshasana pose, it is important to careful in order to see the top of the head and do not touché ground with your forehead. It is an essential thing in shrishasana yoga poses because your neck will bend when your body is inverted. It can cause undue pressure on vertical vertebrate. After you see the head, the elbow and hands on the seat and your knees are brought as near your head as possible. It is making your back erect in inverted position. Your hip should rise slowly. Next, your knees can rise from the seat without jerk and keep your legs folded. It is the most important stage in Shirshasana yoga poses which it should mastered completely before proceed next step further.

In Shirshasana poses, balancing the weight of the body should on the triangular base with your head at the apex position. You are keeping your legs in folded position at the knees and Tigh is rising slowly until they become perpendicular. When you achieve the steadiness of balance at this stage, your legs might stretch ultimate and the body stand erect on the head. Some yoga practitioners are learning the procedure shirshasana poses to help of a wall. But, for some people it is not necessary. If you can do one proceed stage by stage, you do not hurry up impatiently to throw the legs up at once and yoga posture can be learned in a short period. While you are coming to start leg positions, you should fold and they should be lowered. The ultimate knee should keep on the seat. It is not important to stand up and remain standing after complete yoga postures. In Shirshasana poses, you are holding the body upside down that help veins bring your blood circulation to the heart by gravity or force and it can help people to remove congestion from the abdomen and yoga limbs. In Shirshasana poses, the circulation of the blood system on the head is promoted as well. Most of yoga practitioners are practicing this shirshasana poses in 2 minutes. Some people are practicing shirshasana poses in 10 to 15 seconds. It can increase the time during shirshasana yoga poses.

If you are learning Shirshasana a yoga posses, it is important to seek out a competent yoga instructor and learn the basic fundamental technique before practice any challenging postures.in yoga teacher training in goa we will teach you true methods of it. It is advisable to get the doctor’s blessing and warm up or perform yoga postures before continuing for next advance yoga technique. If you are as a yoga instructor, it is no time for ego and arrogance. It is no matter what style of yoga postures and it is time to put your own ego in the back seat.