Acharya Maharshi Patanjali, the originator of the yoga shashtra proposed pranayama as the fourth limb among the eight limbs of the ashtanga yoga. Yama, niyama and asana discussed in the former sections form the basic background work for the practice of yoga. They get the yoga seeker ready for the practice of yoga. The actual practice of yoga starts from the stage of pranayama. Pranayama is the door to the yoga practice. By the time the yoga seeker masters the art of pranayama, he will have acquired the needed eligibility to practice the next stages of meditation namely pratyahar, dharana, dhyana and smadhi. The yoga seeker induces himself as a natural process into the practice of these stages. In other words, only the first four stages of ashtanga yoga (i.e., until paranayama) needs to be practiced through the voluntary effort of the seeker. From the stage of pranayama it need not be practiced but the practice of the later stages happens automatically on their own. These stages do not require dedicated effort.
Pranayama is a blend of two Sanskrit words “prana” and “ayama”. “Prana” means the vital force or energy source of life while “ayama” means expansion. Thus the meaning of pranayama is the expansion of life. It means the expansion of the energy source of life or in other words it means the kriya which reinforces the life energy. Our yoga teacher training in Dharmasala is considered the perfect choice to learn pranayama.

In the early part of the practice of pranayama you should practice two things. (1) The first is to reduce the pace of breath. The force with which the air is inhaled or exhaled should be completely reduced. It should be reduced to such an extent that a piece of cotton placed near your nose should not move. It should be very low, only a slight aberration is allowed. This state can be attained only through the consistent and cautious practice of yoga. (2) The time involved in the function of respiration should be in the ratio of 1:2. In other words if the process of your inhalation takes 10 seconds, your exhalation should take 20 seconds. Pranayama is of three types – rechak, poorak and kumbhak.

Exhaling the air slowly out is called rechak. Inhaling the air in slowly is called poorak. Trying to restrain the air that is inhaled and filled in tightly through the application of jalandhara bandha, moola bandha and uddiyaana bandha is called kumbhak. The continuous practice of these actions results in the accomplishment of simple kumbhak. Apart from this there are two types of kumbhak further. They are anthah kumbhak and bahya kumbhak. The practice of kumbhak with the air inhaled being restrained, it is called anthah kumbhak and the practice of kumbhak after evacuating all the air from within, it is called bahya kumbhak.

You should select a pure, clean, safe and quiet place for the practice of pranayama and the later stages of ashtanga yoga. Our yoga teacher training in Rishikesh is conducted in exactly similar environment. The place you have selected should be secluded and should not be easily accessible by normal people. The yoga seeker along with one or two of his assistants who can aid him in his practice only should be allowed in. None other than these people should be allowed into this place. 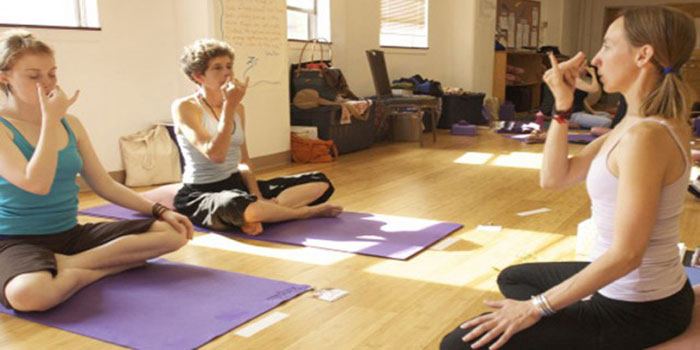 The best season to start the practice of pranayama is either autumn or spring. Summer, winter or rainy seasons should not be chosen for this purpose. But the practice of asanas can be started anytime irrespective of the season.